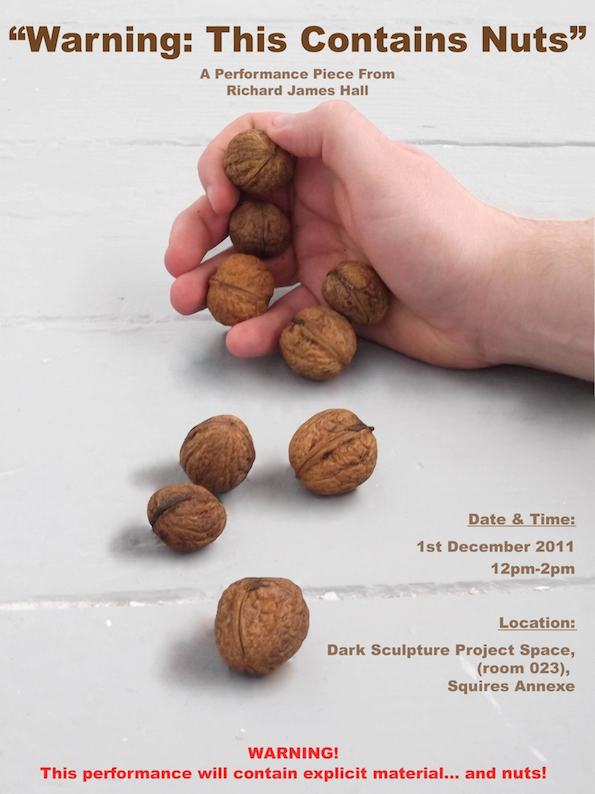 I wrote the above text after I broke through a walnut shell to get to the nut inside. It made me think of the pain and pleasure of intimacy, many people keeping themselves within a socially constructed shell hiding true personality, sex and even life. Even when we do break through the shell and savour the nut for what it is, the now broken shell shards are still around, causing tension within the intimacy. When the intimacy ends, we must navigate around these shards, brittle and sharp. This, in turn, inspired me to create a performance that outlines the emotional spectrum of intimacy through the realms of the physical by crushing walnuts bare-handed, eating some, spitting out the bitter, laying down on the shards and standing over the pain of past intimacies.

However, the department of health & safety was contesting the idea itself. I have had to negotiate with them, as they felt the performance itself was a risk to both the audience and myself. To some degree I could see the logic of what they were trying to state, with the risk of nut allergy sufferers at hand. But even after I came up with a solution for to forewarn people, they still had their doubts. After what seemed like a long time, I had finally got the go ahead for the performance. By then, the performance itself had another meaning for myself: the fight for personal expression against a censorship disguised as concerned welfare.

I am starting to think that by placing myself in a state of risk, I may have actually disturbed, excited and/or agitated people with such a bold statement of physical expression. By making myself seem vulnerable and open, I became a threat, which made me seem stronger. This is also true when it comes to emotional openness.
Powered by